Written by zach. Posted in Uncategorized 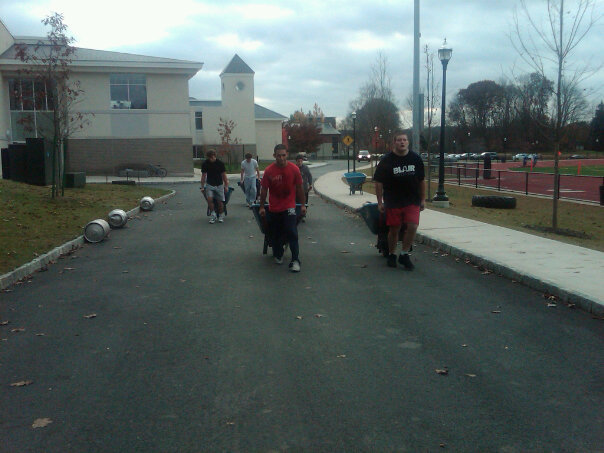 I had a few short minutes to talk with the wrestlers who were on hand.

These bosy wrestle at CJA 3 – 4 x week and train with me 2 – 3 x week at The Underground Strength Gym in Edison, NJ.

Do they need to do more on top of their 5 – 6 training sessions each week? It depends on what they NEED, a few mini workouts to work on weak areas in physical training or wrestling technique will help, but, they need to take action on their own, it’s called the “Champion’s Attitude”.

I asked the CJA wrestlers a few questions, and you can answer them yourself.

I’m NOT a fan of distance runs. I prefer sprints of all varieties, BUT, the BIG shocker to me was that only 2 out of the 25 kids raised their hands.

Most of these kids do nothing in addition to their wrestling.

So is every other wrestler in NJ. They ALL go to wrestling clubs.

So, it IS a Level playing field because barely any of these NJ wrestlers are doing anything different or better than their competition.

To be the best, or at least in the top 10%, you need to have a dedicated and well planned physical training regime to combine with your sports training.

It doesn’t matter what sport you play, you MUST seek the advantage, the edge, both physically and mentally if you want to win.

Final Thoughts: The kids who are wrestling club AND Underground trained are some of the deadliest wrestlers in NJ.

With Blair Wrestling team following the Underground system, I would fear meeting any of those kids down a dark alley.

I am disappointed to see the lack of kids out there doing “extra” on their own.

Too many video games and computers, not enough sweat and physical exertion.

I feel bad for the wrestler who didn’t do the extras when he had the chance, because when he meets an Underground trained wrestler, he’s gonna get busted up.

PS: At The Underground Strength Gym in Edison, NJ we train a variety of athletes, but Wrestlers and Football players make up the majority of our members.

If you wanna win and you have supportive parents, we’ll help you dominate, Guaranteed.