Results of The Underground Strength Gym Fishing Derby In Manasquan 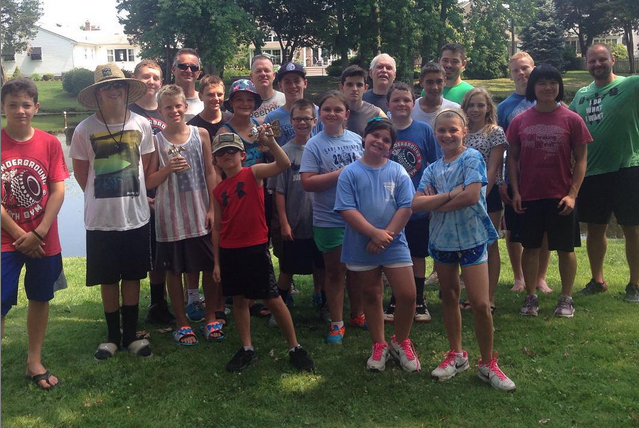 Above, The FIRST EVER Underground Strength Gym Fishing Derby, July 19, 2015 at MACS Pond in Manasquan, NJ!

What an AWESOME time we had at The FIRST EVER Underground Strength Gym Fishing Derby at MACS pond In Manasquan.

As usual, Howell brought the heat and showed the most dedication! Some of our own Manasquan athletes did not show up due to the distance.

We had 3 trophies and I was NOT prepared for the idea that there MIGHT be a tie!

The Categories for the 3 trophies:

– The BIG Kahuna for the Biggest catch of the day

– The Fishing Boss for the most fish caught

Jimmy Romernator of Howell pulled in his 6th fish of the day on the buzzer! fear not, I ordered another trophy to ensure all is fair in what could have been the most intense fishing derby in the history of Manasquan and perhaps NJ.

Perhaps the BIGGEST fish to ever be caught at Macs Pond during #UndergroundStrengthGym #Manasquan #Edison #Fishing derby. #Romernator #HowellNJ

No one fell into the pond and there were no injuries which is always good to report.

I assumed wrongly that as the Catfish King I would easily win this contest but Ernie Onesti and Justin Smith invited their family who showed up and crushed the competition.

Everyone had a blast and my kids and their friends were there helping to organize by measuring the fish, tracking how many fish were caught and just being AWESOME kids!

Mike Wilson aka #Youngblood caught first fish of the day at #UndergroundStrengthGym #Fishing Derby & then he ate it! We don't do anything halfway!!! #Livethecode365 #Edison #Manasquan #Hockey #STRONGLife

The whole time I was sweating bullets I was feeling grateful to be around such awesome people.

Thank you to ALL who showed up to have FUN. It’s that simple. Life is about having GREAT experiences with the people you care about the Most!