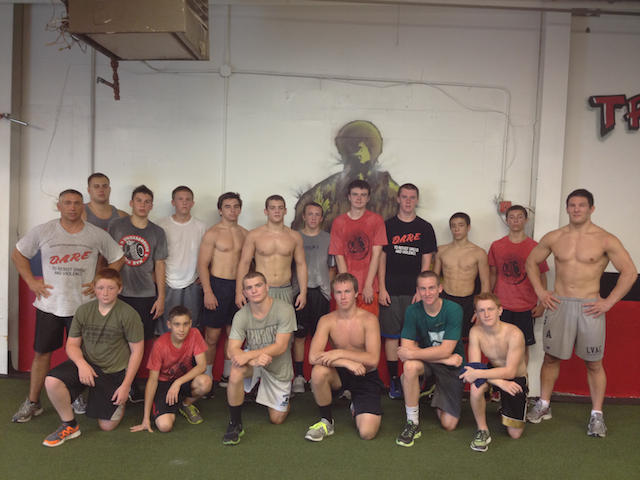 He realized how he was breezing through the workout and 95% of the wrestlers around him were getting hammered by something that we use as a warm up, yet the others were struggling BIG time.

They were too weak, their muscles were in shock, their mind was confused as pain set in that they had never felt before.

They looked uncoordinated and in a nut shell, they were not strong enough to handle what we do as a fraction of our warm up.

This is NOT arrogance, this is a simple fact and a description of what happened.

The ability is there for these kids to become stronger, faster and tougher, and truly….. They ALL need the training, but not ALL want the training.

I saw the look in this wrestler’s eyes who helped me demo the training who has been training with us for 3 months.

I saw how proud he was to be crushing the training that kids 2 – 4 years older than him struggled with as he waited for them to finish.

He realized that he had made MASSIVE gains training with us, not just physically but also mentally.

He just never had much to measure himself against until he saw 30 wrestlers struggling all around him.

His technique was spot on perfect, he didn’t get tired, he didn’t slow down and he showed no weakness as he blasted through our bodyweight training.

The advantage he had was clear and cut. Mind and Body.

As the training went on, I heard the whiners in the back, complaining about the training…. it’s too late, WTF are we doing here so late….. this is bull shit….. and bla bla bla

Right there, I saw the kids who were too arrogant, too lazy and were NOT humble enough OR hungry enough to do the little extras that result in BIG wins.

One thing I don’t do is work with complainers and lazy athletes.

The athletes who blame everyone else for their loss, act as if they are entitled to success before they earn it and work for it.

The edge you have by training at The Underground is tremendous.

I see the difference in you not just physically but also mentally. Compared to the others, it’s night and day edge you have.

What you need to be careful about….

VERY careful about, is this:

You get a little busier than normal with homework or getting out of practice late…. a little more tired than normal from a hard day at school or practice….

You want to stop training ……

You’ll regret it when it counts most and the next well prepared athlete beats you. To be great you need to overcome obstacles and control your mindset.

This is a GREAT video.

My suggestion, watch it, learn from it and take ACTION.

Of course, you might already be too good and what could you possibly learn from a Navy SEAL?

PS: Not a member of The Underground yet?

Thoroughly read through our web site and give us a call to set up your child’s free intro assessment.